This article was originally published in Outlook India

A Singaporean breakfast is just as unique as the small island nation itself. Touted as the most important meal of the day, breakfast is taken very seriously by the locals here. Be it the uniquely Singaporean kaya toast, Chinese chwee kway, Malay nasi lemak or Indian prata, this meal is a perfect tribute to the melting pot that is Singapore.

Here is a complete menu of Singaporean breakfast foods that span across cultures, each of which will leave your taste buds asking for more.

A combination of toast and eggs may sound incredibly simple, but in Singapore, this classic breakfast is served with a local twist. Two thinly sliced toasts are lathered with a giant slab of butter and some kaya, which is a coconut jam preparation (made from coconut milk, eggs and palm sugar or pandan—a Southeast Asian version of vanilla). These are served with two semi-boiled eggs—slightly runny in texture. All you need to do is crack open the half boiled eggs in a bowl, sprinkle some pepper and soy sauce and dip your toast lightly into the mixture. You’ll experience the burst of flavours and what makes it so popular for yourself!

Where: Toast Box, Ya Kun Kaya Toast, Fun Toast and Killiney Kopitiam are popular coffee-house chains serving this quintessential Singaporean breakfast. They have numerous outlets across Singapore. Local kopitiams (coffee houses) also whip up these items daily with each one preparing its own kaya in-house.

Originating from the Indian community that settled in the Malay Peninsula decades ago, this version of the traditional Indian ‘parantha’ is a perfect breakfast option for those craving some carbs. Prepared with flour, salt, sugar and water, this crispy, flaky flatbread is often available with a variety of fillings like egg, cheese, onion, bananas and even sugar! It is accompanied by a side of curry of your choice—fish, chicken or vegetarian (i.e. sambhar). Whether it is late at night or early in the morning, prata is always a good idea.

Where: You can find some of the best roti pratas around Singapore at Mr and Mrs Mohgan Super Crispy Roti Prata, RK Eating House, Springleaf Prata Place, Shah Alam, Mr. Prata and The Roti Prata House.

A fragrant rice dish with numerous accompaniments, the national dish of Malaysia is not only a wholesome meal but is also a Singaporean favourite. Often served on a banana leaf, a typical nasi lemak consists of a bowl of rice steamed in coconut milk and pandan along with fried anchovies, roasted peanuts, a boiled or fried egg, a chunk of deep-fried chicken/fish and a wedge of cucumber with sambal chilli.

Where: Most restaurants have their own variation of the dish, and you can try some of the best ones at The Coconut Club, Kampong Glam Cafe, Village Nasi Lemak Bar or at the Golden Mile Complex.

This Chinese variation of the steamed rice roll comes with a variety of fillings—pork, shrimp or beef. The slippery roll is then cut into bite-sized pieces, and served on a layer of sweet spicy hoisin sauce and topped with sesame seeds and/or chilli paste. Chee Cheong Fun is best eaten when it is freshly prepared and piping hot.

A steamed rice cake similar to the Indian ‘idli’, Chwee Kueh is an extremely popular Chinese breakfast item that can be easily found at most hawker centres. The cake is topped with preserved radish and served with a spicy sambal sauce on the side. It is sweet, salty and spicy all in one go!

Where: To try some of the best Chwee Kueh in Singapore, you can head over to Bedok Food Centre, Tiong Bahru Market or the basement at TANGS (Orchard Road).

Often eaten like a set, the Chinese youtiao is a deep-fried dough stick that is generally had with a glass of soy milk. The fritters taste best when dipped in soy milk, but occasionally, people get rice congee or coffee as an accompaniment.

Where: Get your Youtiao fix at Mr. Youtiao, Youtiao Man or Xin Xin You Tiao, some of the most well-known outlets across the country.

Whether it is Fishball Noodle Soup, Minced Pork Noodle Soup, Mee Rebus or Laksa, soupy noodles are a local favourite when it comes to breakfast items in Singapore. The dish, heavily influenced by the Malay and Indonesian neighbours, as well as the Chinese settlers in the region, comes in a variety of types and flavours.

For instance, Mee Rebus is a yellow egg noodle dish with a thick flavourful potato based curry, while Laksa is a vermicelli dish with a coconut curry. On the other hand, the Fishball Noodle Soup is clear broth.

Where: Despite their differences, each of these items is equally popular and food centres like Old Airport Road Food Centre, Amoy Street Food Centre and Maxwell Food Centre are some the best spots to take your pick.

While all these dishes are local favourites when it comes to breakfast, they can also double up as an early lunch or a snack, accompanied with a cup of locally brewed kopi or teh. 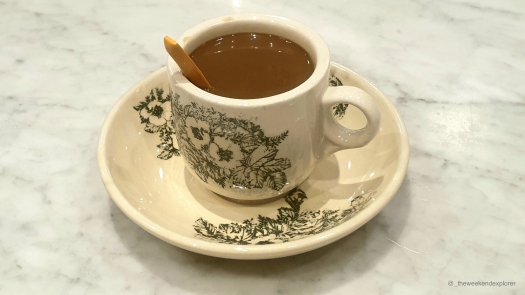 As it is rightly said, ‘Breakfast is a meal you can have throughout the day’ and in Singapore, you will never run out of options.

As a banking consultant by profession and a traveller by passion, I like to explore the world, one weekend at a time. And with this blog, I hope to show you how you can do the same!

Popular on my blog